The What, When and Where

The hydrogen economy has gained substantial momentum over the past 12 months with the passage of the Federal Building Infrastructure Law and the Inflation Reduction Act. There has been a simultaneous push internationally as climate change concerns and the initiatives to find alternatives to natural gas have expanded. In addition, international goals for reaching carbon neutrality have been accelerated. For combustion technologies, renewable natural gas and hydrogen represent the biggest opportunities to reducing carbon emissions now, and even more so in the future.

Hydrogen is frequently used as a fuel in fuel cells but can also be used a fuel for combustion-based energy systems. Capstone Green Energy has designed its energy systems with fuel flexibility in mind. As hydrogen becomes more widely available, energy systems in use today will need to have flexibility to use hydrogen as a fuel.

Hydrogen and especially green hydrogen are positioned for meaningful growth in the coming years. Hydrogen, a light and combustible element, does not naturally occur in meaningful quantities and must be produced through other processes. The goal is to produce hydrogen cleanly for use as an energy source. Green hydrogen is very popular in the news today and is created through electrolysis where hydrogen is separated from a water molecule. The power required to conduct this process is provided using excess wind and solar energy.

As a thought leader in the energy sector Capstone recognized years ago that hydrogen would play an important role in the renewable, green energy landscape in the years ahead. Through long-standing federal, university, and international research partnerships, Capstone has patented technology for the use of hydrogen and works closely with these agencies to assure a clean energy future. We continue to explore the ever-changing energy landscape for complementary partners, technologies, and applications that enables carbon reduction goals to be achieved. Hydrogen pilot facilities, hybrid systems, hydrogen conversion technologies, microgrids, and thermal storage are all energy areas that Capstone is currently pursuing.

In March, Capstone announced that its work with the U.S. Department of Energy (DOE) – Argonne National Laboratory and the University of California, Irvine (UCI) partners determined that the Company’s microturbine-based systems can safely perform on 30% hydrogen blended with natural gas without requiring costly hardware or software modifications.

In addition to testing a 30% hydrogen blend, both partners have been running a Capstone C65 microturbine on 100% hydrogen, utilizing Capstone’s patented High Flame Speed injector design. Results have been very positive, with high combustion stability, demonstrated injector integrity, and elimination of carbon emissions. The results will be instrumental in anchoring a digital twin of the C65 combustion system with which we can continue to develop in a cost effective and efficient manner. Looking forward, Capstone’s research and development activities will transition this design and controls to the C200, fine-tuning for optimum performance and emissions, and in support of pilot hydrogen installations.

With the recent U.S. Government Infrastructure Bill, nearly $10 billion has been allocated to hydrogen-related areas, which includes $8 billion for Regional Clean Hydrogen Hubs, $1 billion for a Clean Hydrogen Electrolysis Program, and $500 million for Clean Hydrogen Manufacturing and Recycling Initiatives. The U.S. DOE has already begun to move ahead with Hubs planning. 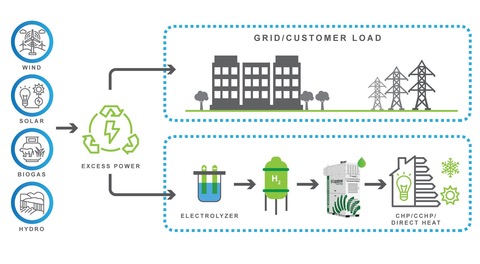 Green hydrogen-fueled microturbines are perfect for complementing the intermittent nature of wind and solar power, making them an ideal component of the modern clean and green microgrid. Further, when wind and solar energy production exceeds demand, excess energy can be used in the production of storable renewable hydrogen energy. Stored hydrogen provides a convenient high-density fuel source and can then be used as a carbon-free fuel for Capstone’s microturbines, which are easily located adjacent to fuel sources.

Microturbine customers then benefit with a decentralized, resilient, and flexible energy source, while providing cooling and heat for local use.