Behind the Rebrand: An Interview with CEO Darren Jamison 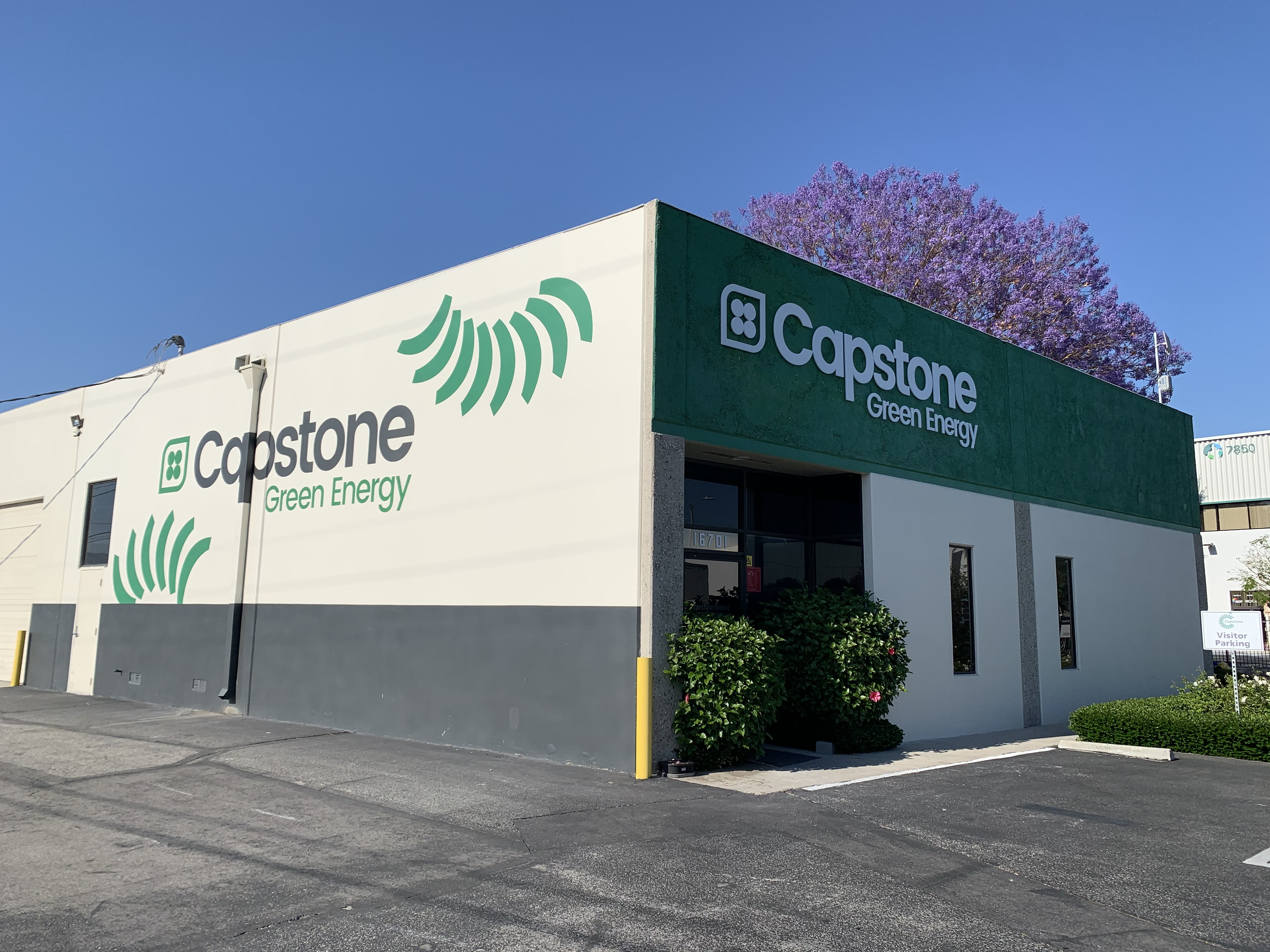 Q: Why rebrand Capstone and why now?

The term “rebrand” sounds like we’re just taking the same company and giving it a new name. But what we’re actually doing is more of a business evolution. Capstone has gone from being a product-centric, microturbine company—primarily an oil and gas partner—and transformed into a wide-ranging, green energy company whose primary market is energy efficiency as well as helping customers reduce their carbon footprint and save on their energy costs.

While it’s true that our second largest business line is still oil and gas, even that is starting to focus more on ESG* issues and decarbonizing the oil patch than exploration or transmission. Renewable projects, like biogas and landfill gas, have grown nicely into our third-biggest market. And we’re starting to move into the new, fast developing hydrogen economy.

Simultaneously, we also started a new direct sales organization and realized we needed additional ancillary, low emission or zero-emission products in our portfolio. That’s why we recently brought in battery storage, microgrid solutions, and solar PV, as well as some other hybrid products. And so, the company has really changed or evolved, and we thought it was the appropriate time to call the company what it has really become – and that’s Capstone Green Energy.

As a publicly traded company, was it tricky to move this initiative forward?

Two years ago, we actually held an offsite in Houston with the leadership team and three members of our Board of Directors. We came up with approximately 50 potential ideas to improve the business. Then we scored, and force ranked them down to a top 24 and then again down to 12. Number 12 on the list was rebranding the company. So, when we discussed it again this past January, I reminded the Capstone directors that we had all agreed this was a good idea, and now was the appropriate time to move forward. It’s worth noting that we also implemented 10 of the other 11 items on that list.

From the start, there was no question that we wanted to keep “Capstone” in the name—after 20 plus years in business with over 10,000 units shipped out into the world, we would have been walking away from a lot of history and brand recognition. But we knew it was important to pair the legacy name with “green energy” as customers and investors did not understand our clear value proposition.

What’s the meaning behind the new logo?

The new logo is essentially a leaf containing four dots. Each of those dots represents one of the four business lines in the company's new structure,. Previously, our focus was just on products and services. Now our products group is inclusive of anything we do that takes in fuel and converts it to electricity and thermal energy, while our services group is now more an EaaS (Energy as a Service) provider. The third division we added was our battery and thermal storage solutions, and then finally, the fourth is our new hydrogen product lineup.

Within each of those four pillars of the company, we created a separate icon to represent each division. That’s where we keep the original Capstone logo alive: as an icon representing our energy conversion products division.

With the new logo, we really wanted something clean, fresh, and more reflective of what the company has evolved into. I think in the past, Capstone has been seen as a stodgy, old-school tech kind of company, so our aim was to reflect a cleaner, greener focus.

Once we had the new logo and graphic style, we knew we needed to dress up our product packaging. When we ship our containers worldwide, we cover them to protect the paint on our units, so now we put a “branded cover” over the units when we ship. It has essentially become a 40-foot billboard that’s traveling all over the world; if we’re not putting our name on it, we’re missing a marketing opportunity. It’s a great product, so our goal is to educate everybody that’s it’s green and clean technology. We also added “Made in the USA,” as the team felt that was important and differentiated us from some of our competition.

How long did the process take? What was it like?

I made the decision and ran the idea by the board for their feedback on January 12, and we went public with the new branding on April 22, which is Earth Day.

Needless to say, it was a little challenging, but we put together a group of top employees within our company from each functional area, and they helped in both the rebranding process and the actual execution of the name change. We also used an outside consultant, CoForce, to help us with some of the corporate videos and other rollout strategies. We actually got to know them through our Andretti Autosport network.

But candidly, the real secret to moving things quickly was the decision to put the one person who could slow us down in charge of the committee: our in-house legal counsel. The plan was to figure out who’s the biggest potential roadblock and put them in charge of hitting the date! Of course, it was also great to give this talented individual the experience to go beyond being just an individual contributor, getting to know the other parts of the business, and working with people he wouldn’t ordinarily have had the chance to. At the end of the day, he did an excellent job and is ready to tackle the next big project, which will most likely be around ESG.

The biggest key to implementation was moving really quickly. We had the full team on weekly video meetings and would turn around decisions either on the spot or at most within 24 hours. Everyone really needed to maintain a thick skin because if a new concept was presented or the team wasn’t moving in the right direction, no one was going to pull any punches on feedback. We simply didn’t have time to do anything but pivot on the spot.

When we got the preliminary logos or the first cut of the videos, instead of telling the CoForce team we don’t like the imagery, we actually went onto stock photo sites and gave examples, saying, “Use something like this at the 0:47 second mark of the video.” That wasn’t to step on people’s creative toes, but just because we had to move so quickly and didn’t have time for a back-and-forth process.

Both the Capstone and CoForce teams worked 12+ hours, 6 or 7 days a week for a couple of months. So having Earth Day as a target date and knowing we were going to be on the NASDAQ tower drew a line in the sand. Plus, it gave everyone something to celebrate, including both a new branding and Earth Day event here at the Capstone office as well.

After being in business for over 20 years, did you encounter any resistance to changing things?

I was actually surprised at how smoothly that part of the process went. Any resistance we encountered was quickly overcome once they heard and understood the reasoning and business strategy. We were also getting buy-in from management every step of the way.

One of the sticking points was whether to change our Nasdaq ticker symbol from CPST to CGRN. That was a tough decision, but ultimately, we decided that we’re a different company and we should be different across the board. So, there was the name and logo change, the ticker symbol change, and we created a new tagline: “Smarter Energy for a Cleaner Future.”

The most significant ongoing struggle is that many of our customers may not see the benefits of green energy, or the concept resonates negatively for them in today’s political landscape. So, we’ve tried to explain to CEOs and CFOs that consumers are moving this way. Politics are not the question; the question is, what do your customers care about? And we’re not just talking about Gen Z. Imagine if you’re a hotel and a cost-competitive hotel down the street is green, and you’re not, you stand to lose a lot of business just by travelers opting for a more earth-friendly choice. According to a Nielsen study, 73 percent of consumers say they would likely change a behavior to reduce their impact on the environment. And sustainability and ethics are the second-highest reason consumers retain brand loyalty.

Plus, we want to make clear, what we’re talking about is both reducing carbon and saving money. We’re not just green for the sake of being green. The first thing we ask prospective customers is to rank three things in order of importance:

Once a customer ranks those, it allows us to customize a green energy solution. So, we aim to overcome any resistance by making a solid business case based on their preferences.

How has the new branding been received?

Customers and employees really seem to love the new brand. Distributors were initially mixed about it but have warmed to it.

A lot of people feel like we’re a different company than we used to be. We saw it clearly at the beginning of the IndyCar 2020 season when we started with a white car and green “Capstone Turbine” on the livery – and we realized that people didn’t easily relate to it. We also didn’t receive the amount of social media or track attention we were aiming for—they didn’t understand who we were as a business. And we knew we needed to educate the public on who we are more simplistically.

In the middle of the race season, we decided to make a swift branding effort change, where we reversed the colors on the car, having it be primarily green with white “Capstone Green Energy” lettering. We also created and officially launched Capstone’s social media #ShiftToGreen marketing campaign…then, all of a sudden, people understood it as the “Green Energy Car,” rather than the “What’s a Turbine Car? Does it have a turbine inside?”

Overall, we are incredibly pleased with how well the rollout and response have been and look forward to adding additional green products and services in the near future.